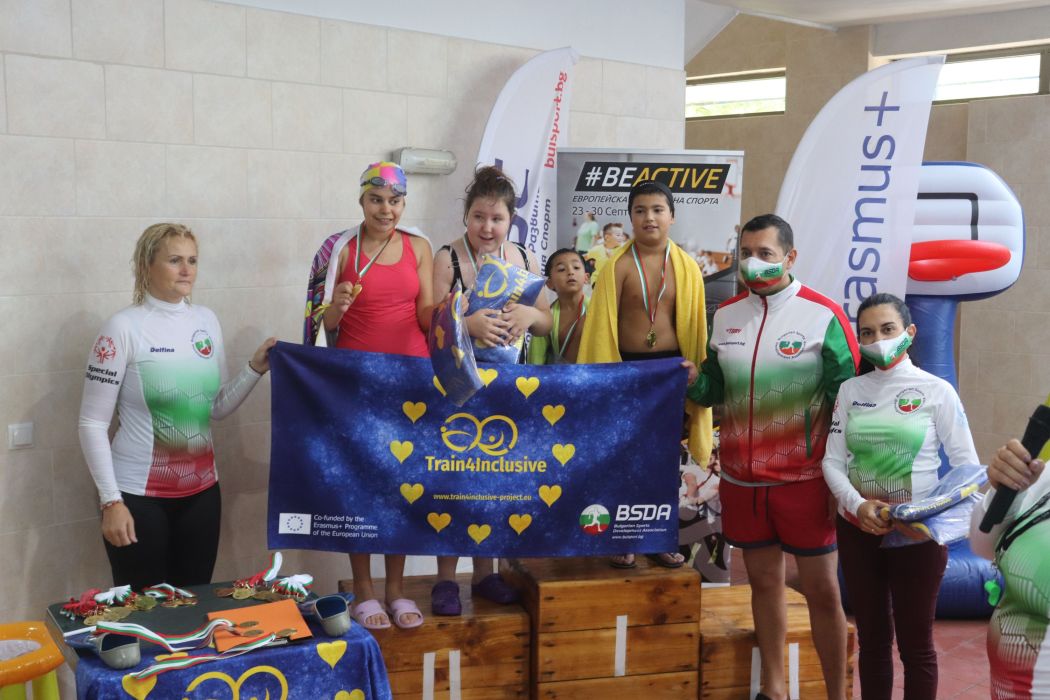 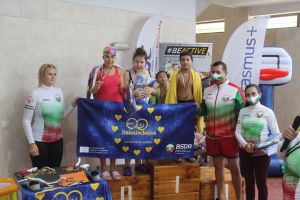 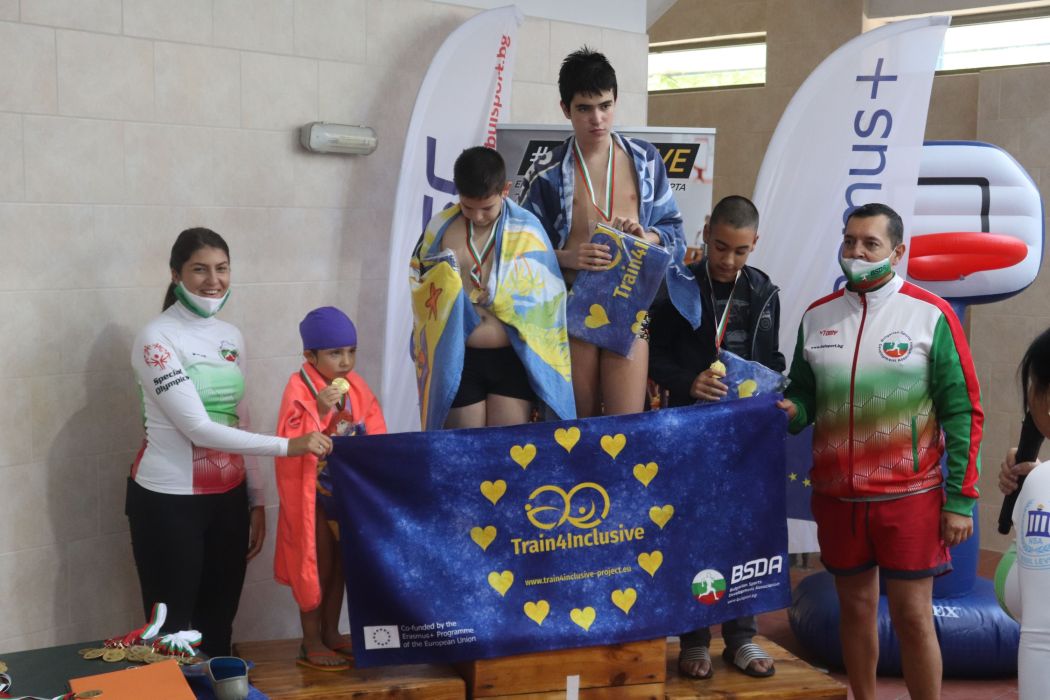 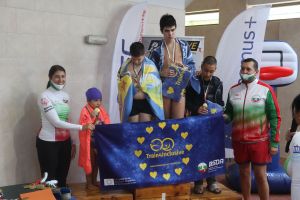 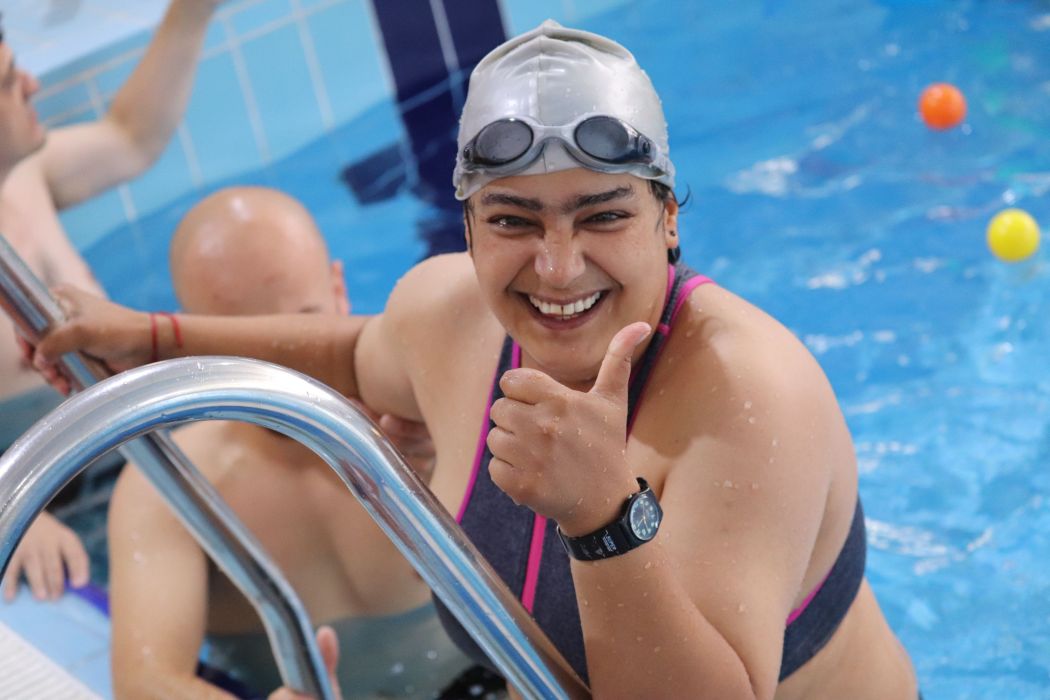 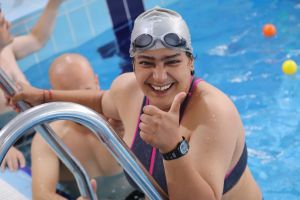 On September 25, 2021, in the “Madara” pool of the National Sports Academy "Vasil Levski" #Train4Inclusive event in adapted swimming was held, which was attended by athletes with intellectual disabilities. #Train4Inclusive is implemented by an international consortium including representatives of Bulgaria, Croatia, Italy, Slovenia and Spain and aims to develop a methodology and tools that sports coaches and managers of sports activities for people with disabilities will be able to use to monitor the progress of their physical, cognitive and social skills. The swimming event included 50m adapted swimming with a partner, as well as water fun for the participants, who were divided into two age groups - under and over 17 years.

In the afternoon, a Sports Night was held as part of the European Week of Sport, in which the Bulgarian sports development association took part with an information tent, in which it shared information about the current activities of the organization. In the sports village over 30 federations and sports clubs presented their activities through demonstrations and information materials, and BSDA paid attention to the activities implemented under the projects Sport Diplomacy Academy, HEPOSI, SPORTolerance, Play'In Together, Active in Sport Again, GoSport and Art of Creative Thinking, co-financed by the European Union's Erasmus+ program. A demonstration match in united basketball of Special Olympics was held between the teams in Adapted Basketball of NSA Vasil Levski and House for adults with mental disabilities in the town of Banya, Karlovo.

European Week of Sport #BeActive is organized for the seventh consecutive year by the Ministry of Youth and Sports. Between 23 and 30 September, everyone will have the opportunity to become part of the largest sports festival for amateurs in Europe. In 2021, the motto of the European Week of Sport is "It's time to be active again, nothing can stop you", and the initiatives will be held in Sofia, Montana, Vidin and Vratsa. It aims to support the personal development of young people and to support their sports needs. #BeActive is part of the European Commission's initiative to promote sport and physical activity for EU citizens. The national coordinator for Bulgaria is the MYS, co-financed under the Erasmus + program of the European Union.

Ambassadors of the European Week of Sports this year again are the successful Bulgarian athletes and the talented young competitors. These are the Olympic champion in karate Ivet Goranova, the Olympic champions from the National Rhythmic Gymnastics Ensemble Simona Dyankova, Laura Traats, Madlen Radukanova, Erika Zafirova, Stefani Kiryakova, the European Vice Champion in Rhythmic Gymnastics Boryana Kalein, the judo athlete Ivaylo Ivanov and the silver medalist of the World Table Tennis Championship for people with disabilities from 2018 Denislav Kodzhabashev.